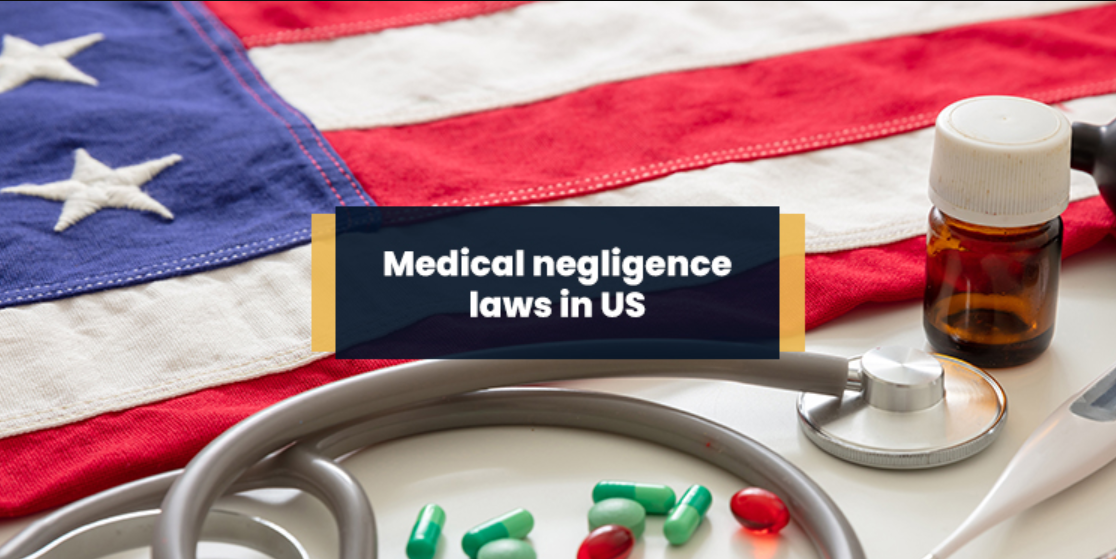 Medical Negligence Laws in the US

by Harsh Upadhyay
in Layman Litigation, Medical Malpractice
Reading Time: 7 mins read
A A
0
Share on FacebookShare on Twitter

The law of medical negligence dates back to the laws of ancient Rome and England. These laws can be traced back to 2030 BC. Since then, the law has been evolved in almost all of the countries to date. In the US medical malpractice law is derived from the English common law and was developed by rulings in various state courts.[1] In the United States, medical malpractice suits first appeared with regularity beginning in the 1800s[2]. However, the frequency of medical malpractice has been increased since the 1960s. one specialty of arthroplasty surgeons reported that more than 70% of respondents had been sued at least once for medical malpractice during their career[3]. When a claim is filed, the respondent doctor should manage a new legitimate area, where the objectives, professional conduct, and strategies followed by the parties to litigation are not the same as the practice of medicine. The goal of this article is to provide a basic introduction to the concepts of medical malpractice law in the US.

Current medical malpractice law has its origin in 19th century[4] English common law. Medical malpractice is defined as any act or omission by a physician during the treatment of a patient that deviated from accepted norms of practice in the medical community and causes an injury to the patient. Medical malpractice is a specific subset of tort law that deals with professional negligence[5]. This law has been traditionally under the responsibility of individual states and not under the federal government, in contrast to many other countries[6]. Therefore, the framework and rules that govern these laws have been established through lawsuits filed in state courts which varies across different regions of the country.

The claim must have the following characteristics for considering medical malpractice under the law.

A violation of standard care: The law acknowledges that certain medical standards are recognized by the profession as being acceptable medical treatment by reasonably prudent health care professionals under like or similar circumstances. This is known as the standard of care. A patient has the right to expect that health care professionals will deliver care that is consistent with these standards. If it is determined that the standard of care has not been met, then negligence may be established[7].

For a case to be viable the patient must show the significant damages resulted from an injury received due to medical negligence. As known medical malpractice lawsuits are extremely expensive to litigate, frequently requiring testimony of numerous medical experts and countless hours of deposition testimony. Further, the claim must be able to prove that the injury has resulted in pain, suffering, loss of income, past and future medical bills, etc.

the patient must prove that he or she would have sustained the injury that would not have occurred in the absence of negligence. And if the patient fails to prove so then there is no case.

The Court system in the United States:

In the USA judicial trial is a fundamental constitutional right. Here judicial tribunals have different names but the structure of the hierarchy is the same in all the states. Every state has trial courts where civil disputes are filed and litigated; and there is usually a system of appeals courts, with final judicial authority resting in the state supreme court. Medical negligence cases are filed in state general court. Legal rules guide venue and jurisdiction in each state. If the malpractice claim involves the federal government acting through a federally funded clinic or a Veteran’s Administration facility, then the action is filed in a federal district court. Each state has at least one such federal district court. Thus, if a medical malpractice case is tried in federal court, state malpractice law still applies, with federal procedural rules of jurisprudence. Procedural rules have to do with legal housekeeping functions that guide the litigation process[8].

The legal system of filing medical negligence case in the US:

First, the lawsuit is initiated by filing a summons, claim form, or complaint; these types of documents are known as pleadings. Pleadings put forward the supposed wrongs committed by the doctor with an interest for alleviation. In certain jurisdiction, the lawful activity is started by service of legal process by physical delivery of documents on the respondent by an interaction worker; these documents are then filed with the court with an affidavit confirming that they have been given to the respondent doctor as indicated by specific principles of legal procedure

As known, to get any compensation for injury the injured person needs to prove his claim and the cause of injury. Similarly, here the win monetary compensation for injury related to medical negligence, a patient needs to prove substandard medical care which resulted in injury. Also, the case must be filed promptly. This period prescribed by the court is called the “statute of limitation” which again varies from state to state. Damages take into account are both actual economic loss such as lost income and cost of future medical care, as well as non-economic losses such as pain and suffering. Physicians should carry their medical malpractice insurance to protect themselves in case of medical negligence and unintentional injury. One exception to medical liability can arise in the context of those who volunteer assistance to others who are injured or ill; this exception is called “Good Samaritan”[9].

Similar to other methods of resolving civil disputes, medical negligence claims also use an adversarial system of adjudication. In some cases, the doctors are unaware of the functioning of the legal system until there is a negligence lawsuit filed against them. If we make a comparative study of these laws among some countries, we find that there are no simpler options or answers to address medical negligence. While future reforms might continue to develop a system that is economically efficient and compensates adequately to those who are injured by medical negligence.