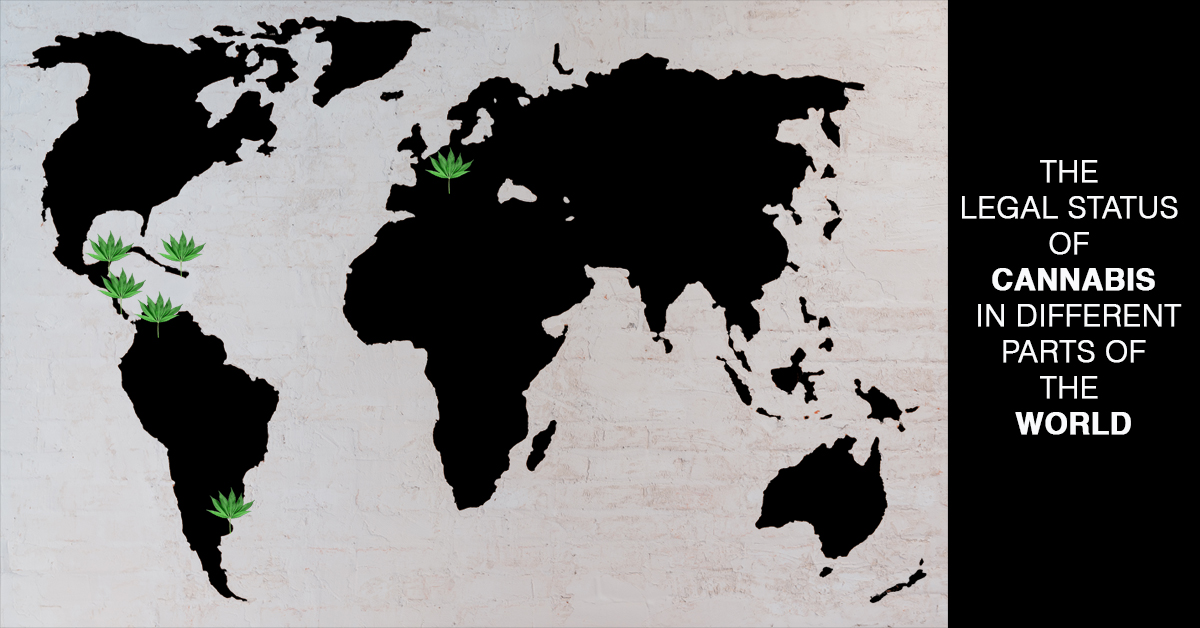 The legal status of cannabis in different parts of the world

by Syeda Fauzia
in Layman Litigation
Reading Time: 6 mins read
A A
0
Share on FacebookShare on Twitter

The legality of cannabis for medical and recreational use varies by country, in terms of its possession, distribution, and cultivation, and (in regards to medical) how it can be consumed and what medical conditions it can be used for.[1] These policies in most countries are regulated by three United Nations treaties: the 1961 Single Convention on Narcotic Drugs, the 1971 Convention on Psychotropic Substances, and the 1988 Convention Against Illicit Traffic in Narcotic Drugs and Psychotropic Substances.[2] Cannabis is classified as a Schedule I drug under the Single Convention treaty, meaning that signatories can allow medical use but that it is considered to be an addictive drug with a serious risk of abuse.[3]

The use of cannabis for recreational purposes is prohibited in most countries; however, many have adopted a policy of decriminalization to make simple possession a non-criminal offense (often similar to a minor traffic violation).[4] Others have much more severe penalties such as some Asian and Middle Eastern countries where possession of even small amounts is punished by imprisonment for several years.[5] Countries that have legalized recreational use of cannabis are Canada, Georgia, Malta, Mexico, South Africa, and Uruguay, plus 18 states, 2 territories, and the District of Columbia in the United States and the Australian Capital Territory in Australia.[6]

Let Us Look at Some Countries On Legalization on the Same

Europe: “European police may also turn a blind eye to weed if it is in small quantities and clearly stated that it is for personal use. If you carry cannabis in more significant amounts, it may seem like you will sell it, and such commercial intent is to be avoided. If you buy cannabis to share with a group of people in Europe, you should quickly divide it into smaller quantities before the police search.”[7]

America: “In America and Canada, cannabis usage is either legal or considered a misdemeanor. Just as it is with Europe, it is highly recommended that anyone visiting such countries remain discreet even in states where it is entirely legal.

Some people in the Americas and Caribbean may object to the cannabis smell when smoked or vaped around them despite cannabis having a legalized status in the state. When you get to the south of the U. S. A, the situation becomes highly complex, so be careful. South American countries are more accepting of marijuana as many nations in this region have decriminalized cannabis possession despite sales and cultivation remains illegal.

Jamaica is the only country where the utilization of cannabis is celebrated as a part of their culture. Other countries are either legal, semi-legal, or ignored (so long people are discreet with it). Currently, these countries where it is legal, semi-legal, or ignored include Costa Rica, Mexico, Peru, Belize, Columbia, Peru, Argentina, Ecuador and Uruguay. Just as we mentioned with Europe when outside Jamaica, ensure that you carry small quantities of cannabis. Also, emphasize the fact that it is for personal and non-commercial use.”[8]

Belize: “Should you smoke here? The answer is a big YES! In late 2017, the government of Belize was kind enough to decriminalize cannabis in amounts up to 10 grams. You can smoke it in your home, or someone else’s provided you’ve gotten explicit permission. That includes their sailboat.”[9]

Costa Rica: “Should you smoke here? You can bet on it! Like with many places on this list, it’s technically illegal to smoke here but doing so carries no legal penalties. Smoking up is super common here, and you can be pretty comfortable smoking out on the beach and so forth, not just in the privacy of your room.”[10]

Uruguay: “At Uruguay, folks can head over to the pharmacies to hoard marijuana for recreational purposes. However, they will have to first officially register with a regulator. The country had legalised the recreational usage of marijuana in the year 2013 for people aged 18 and above.”[11]

Colombia: “In Colombia, the selling of marijuana is still illegal. But one can grow up to 20 plants here for personal use. And the plants can grow really huge here as the climatic conditions are suitable. The country has decriminalised the possession of up to 20 grams of marijuana.”[12]

The Psyche Behind Gang Violence: Overview