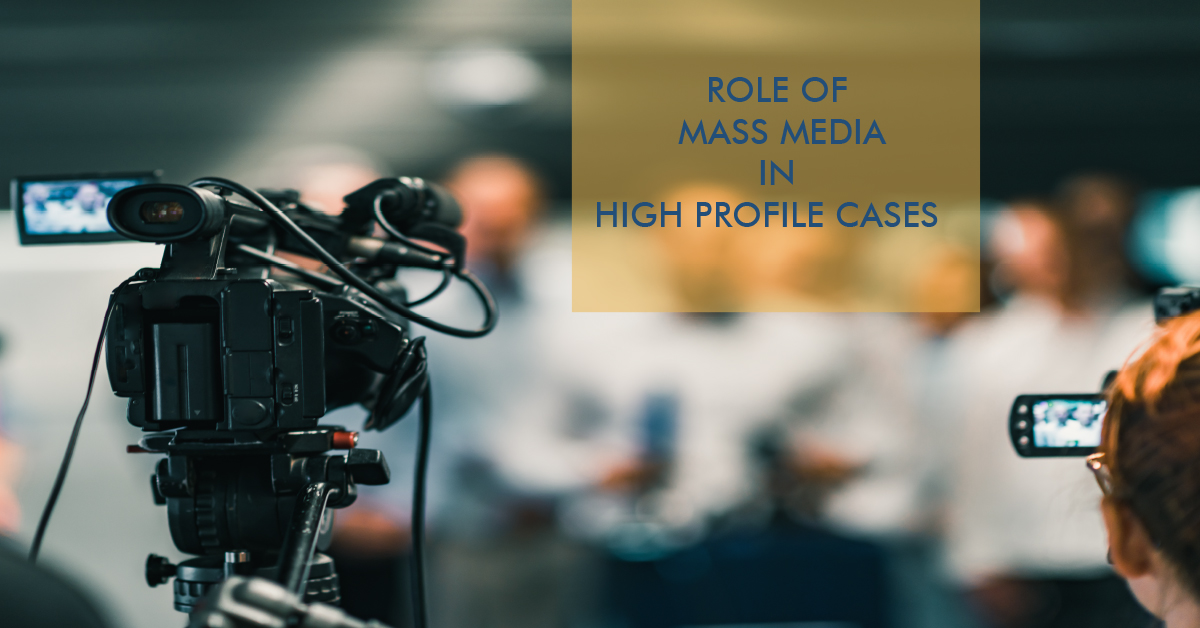 Whether it was the shocking arrest of O.J. Simpson or the recent Johnny Depp vs Heard trial. The media seems to be influencing the public attention with help of these stories in the manner, they seem fit.

by Syeda Fauzia
in Layman Litigation
Reading Time: 24 mins read
A A
0
Share on FacebookShare on Twitter

Social media plays a vital role in determining public’s way of thinking concerning various state of affairs. Whether it was the shocking arrest of O.J. Simpson or the recent Johnny Depp vs Heard trial. The media seems to be influencing the public attention with help of these stories in the manner, they seem fit. The issue lies herein is that: Whether media coverage of high-profile criminal trials or cases that involve famous celebrities make an impact on the outcome of such cases?  Let us discuss the same with the help of this article. In addition to this, we will also be covering laws and case laws for our better understanding.

“Law – An accused is innocent until proven guilty.

Society – An accused is guilty until proven innocent.

Media – An accused is always guilty.”1

The generic population is not only influenced by the media but also impacted by it. Such impact can either be drastic, incidental, or even gradual. Whilst most of us are hinged on the media to tell us which particular products are good. They also help us to stay in trend and keep us to keep track with the latest celebrity gossip. In reference to the Sixth Amendment of the Constitution, states that, each and every accused is permitted a fair trial by an unbiased jury. As a consequence of large-scale media coverage, selecting a jury panel can prove to be exceedingly burdensome. Normally, it is understandable that the jurors develop some sort of biasness on the case. This happens, for the very reason that the media is constantly reporting the said case. Therefore, it is important to assess the impartialness during selection of the jurors.

In a trial, the members of the jury are questioned by attorneys representing both the sides. These would include: how well they know about the case, whether they have gotten their facts and issue straight and questions about their ability to make an impartial decision.

However, it is only natural that even the best of best jurors who claim to be not biased may in fact end up being a bit prejudiced. This is often, the result of the publicity thrown by the media that unconsciously dwells into our minds. Same which, later is responsible for most of the decisions taken by us. In contrast, if any juror decides that he/she is not capable of making an unbiased decision are eventually eliminated. In addition to this, lawyers arguing the case, can also eliminate the jurors, by using “peremptory challenge”. A peremptory challenge also allows attorneys to veto a potential juror on a “hunch”.2

There is enough research that shows that judges too can be influenced whilst making their rulings due to the media reporting’s. “A Stanford University study found “press coverage magnifies the influence of voters’ penal preferences on criminal sentencing decisions” of elected judges for severe violent crimes. (Lim, Snyder & Stromberg, 2010) When a case receives a large amount of media coverage, elected judges tend to sentence more punitively than if the case is less publicized.”3

“Social media allows for information to move quickly in updating society on the developments of high-profile, real-time crime cases. However, individuals may receive bits and pieces of the overall occurrences of the trial rather than the full picture. This may allow opinions to formulate quickly yet not always with consistency and continuity of information in totality,” explained St. Thomas University Prof. of Criminology Dr. Debbie Goodman, via an email.”4

Certainly, “the notion that mass media would affect the legal process clearly goes back to the beginning of the printing press, and perhaps much further. One of the first trials prosecuted by the media in the 20th century was Roscoe ‘Fatty’ Arbuckle who was convicted by the courts but lost his career and reputation because of the media coverage. There was another A-G v. Fraill case where Joanne Fraill was sentenced in 2011 by London’s High Court to eight months in jail for contempt of court for sharing Facebook messages with the accused in a drug trial when she sat on the jury. A UK juror had been removed from a court for child abduction and sexual harassment after asking her Facebook friends to help her decide on the verdict. Convictions have been overturned and mistrials declared when it was discovered that juries had accessed information on the Internet that had not been presented in court.”10

Bradley v. State : “This is one of many recent cases where social media evidence was used to identify suspects and/or witnesses. In Bradley, the victim of an armed robbery identified his assailants through publicly available Facebook photos. In its opinion denying Bradley’s appeal, the Texas appellate court pointedly noted that “Vast online photo databases—like Facebook—and relatively easy access to them will undoubtedly play an ever-increasing role in identifying and prosecuting suspects.”11

Hoffman v. State: “In Hoffman, an 18-year-old female was convicted of vehicular manslaughter. The Court enhanced her sentence when the prosecution introduced into evidence her MySpace page with photos and comments glamorizing alcohol abuse.”12

In another case law, “When Sam Sheppard, a wealthy Cleveland doctor, was accused of murdering his wife, national press coverage became intense. During his trial, reporters, photographers, and TV cameras continually interfered with the proceedings. The trial judge did little to weed out jurors who had formed opinions from the pretrial publicity or to shield them from the media circus that took place during the trial. Sheppard was convicted, but he eventually appealed to the U.S. Supreme Court on the grounds that he had been denied a fair trial. The Supreme Court agreed, saying that “bedlam reigned at the courthouse.” The court held that when there is a “reasonable likelihood” that a fair trial will not occur, judges must take legal steps to protect their courts from outside influence. The court then listed a number of “remedies” judges could use to counter the prejudicial effects of publicity on jurors. Under these new conditions, Sheppard was retried and acquitted. [Sheppard v. Maxwell, 384 U.S. 333 (1966).] At the time of the retrial, Sam Sheppard had served 10 years in prison.”13

Some of these remedies include:14

What is social media, trial? Trial by media is a phrase popular in the late 20th century and early 21st century to describe the impact of television and newspaper coverage on a person’s reputation by creating a widespread perception of guilt or innocence before, or after, a verdict in a court of law.15

Conclusion: Media is a fundamental part of every democracy. It serves as a right – to being free to express your opinions and speech. However, it is important that such rights are not overstepped onto the sanctitude of the judicature in high-profile cases. Due to this very fact, many convicts have been set free whilst many have also been wrongfully convicted. The regulation of the media in regards to spreading false information as such has to be regulated strictly as well. In my opinion, it is high time that media stop acting as someone who passes the verdict, as this could also cloud the ongoing investigation.

Media’s effects on today’s world are both positive and negative. Positive in the sense that, it isn’t easy to influence a good journalist, as such they bravely report the realities of the world, and hold people accountable. Negative in the sense that, many media companies can be easily bought or influenced by any political parties. Social media is what provides a platform to share countless of information. Therefore, it is necessary to not only draft laws specifically catering to this area but see to it that it has been implemented correctly as well.

All About Alternate Dispute Resolution