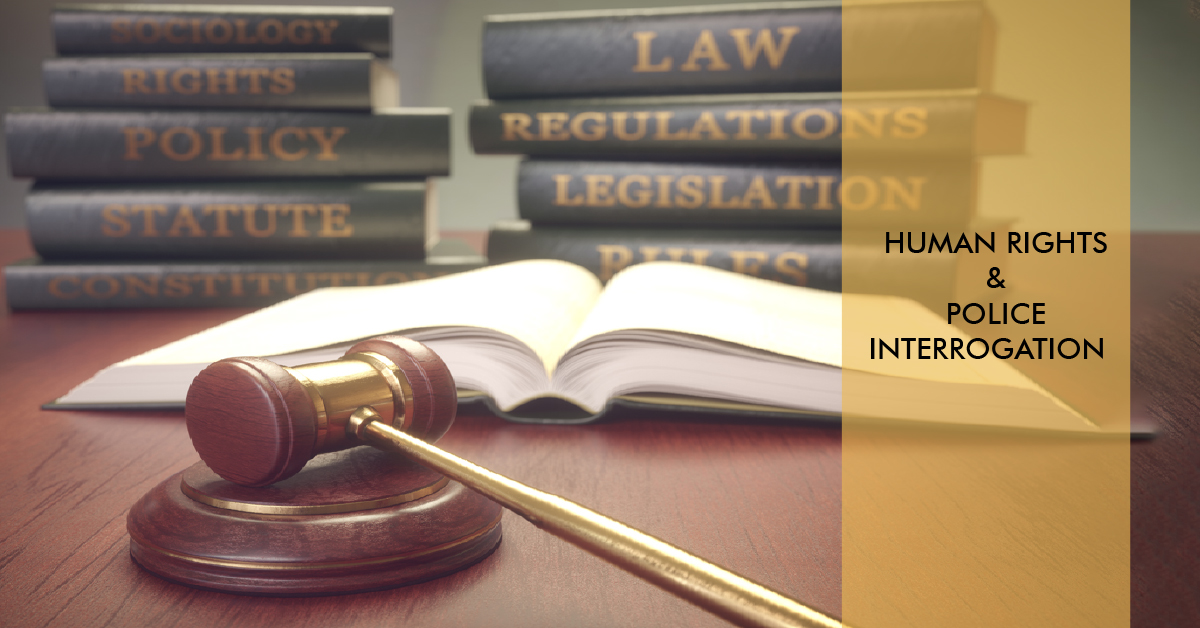 by Syeda Fauzia
in Layman Litigation, Magazine
Reading Time: 12 mins read
A A
0
Share on FacebookShare on Twitter

In this article, we will be drawing a connection between human rights and police interrogation. The same, will be supported by case law. In addition to this, we will also be discussing about the legal code present all around the world. Let us first begin with understanding the general meaning of both of these terms.

Human rights are fundamental rights, guaranteed to us by just for the mere fact that we are human. The word “human” denotes that it is applicable to all humans, irrespective of gender, race, ethnicity. These rights are natural rights and cannot be taken away by a state. However, few of them can be restricted to some extent.

According to Black’s law dictionary, “police” means “The governmental department charged with the preservation of public order, the promotion of public safety, and the prevention and detection of crime.”1 The concept of Police was developed in England in 1800’s by the establishment of first Municipal Force under the control of Sir Robert Peel. Before that people used to patrol the streets on weekly basis voluntarily as Police.2 The police of a state, in a comprehensive sense, embraces its whole system of internal regulation, by which the state seeks not only to preserve the public order and to prevent offenses against the state, but also to establish for the intercourse of citizen with citizen those rules of good manners and good neighborhood which are calculated to prevent a conflict of rights, and to insure to each the uninterrupted enjoyment of his own, so far as is reasonably consistent with a like enjoyment of rights by others.3

The International Human Rights are binding upon all the states if they are subject to any treaty or convention.4 “Many International conventions and organizations have emphasized on defining as to what basic Human Rights are. According to Article – 3 of the UDHR, everyone has the right to life, liberty and security and this ‘everyone’ includes each and every person whether a citizen or a refugee and whether a free or a detained person.”5 Following the initiation of international safeguards, the regulations in regards to police functionary came into force. This was in relation to interrogation of detained persons.

“Truth serum” refers to various drugs that have been used in attempts to extract truthful statements from people. Wine was the basic method for extraction during ancient times, however, the first documented use of a truth serum to solve a criminal case occurred in New York in 1903. Ether, the truth-inducing drug, prompted a confession from a police officer who had murdered his wife. But the first drug ever approved as a truth inducing drug was scopolamine.”6

These methods, many a times can invoke constitutional laws of the country as well as violate various international legislations. “The International Covenant for Civil and Political Rights (1966), Geneva Conventions -III&IV and Additional Protocol-I lays down specific provisions against torture, cruelty, or inhuman and degrading treatment of prisoners of war, civilians, or unlawful combatants confined to detention and interrogation. International humanitarian law, International Human Rights law, and the domestic laws of many countries have similar protective clauses to safeguard the rights and privileges of persons in custody or detention. Despite such safeguards, lack of professionalism, and proper planning and training of the interrogators are other major bottlenecks that defeat the very purpose of interrogation. The two most common methods of interrogation used by the police all over the world are the Reid and Kinesics technique. The United States of America uses the Reid technique that involves 9 steps to elicit confession or admission of guilt from the accused. Among other things, these include a direct confrontation with the suspect urging him to explain why the offense took place; shifting the blame away from the suspect to some other person or circumstance to build confidence on him to speak truth; discouraging the suspect from denying the guilt; trying to use suspect’s explanation to move towards the confession; reinforcing sincerity to ensure that suspect is receptive; posing alternative questions giving two choices- guilt or otherwise and finally leading to the suspect’s confession or admission of guilt that is recorded as evidence.”7

“All men are born free but everywhere they’re in chains”

The CIA aka the Central Intelligence Agency used certain similar modus operandi on individuals captured in connection with 9/11 attacks. “Under the domestic laws in the United States of America, torture is defined as “an act committed by a person acting under the color of law specifically intended to inflict severe physical or mental pain or suffering” Severe mental pain or suffering includes the “infliction of severe physical pain or suffering,” as well as “other procedures calculated to disrupt profoundly the senses of the personality. This applies within the U.S. as well as to U.S. nationals acting abroad. The Supreme Court has also determined that prisoners detained under the Military Commissions Act of 2006 were required to be given the right to habeas corpus in the case.”8

We all have seen enough movies and series to know how police interrogations normally go about. It starts from “you have the right to remain silent, anything you say will be used against you in the court of law” and ending with “I will not answer your question, until I get to call my lawyer”. The former sentence is known to be as the “Miranda warning”. The same needs to be given or any other warning before questioning a person.

In 1966, the U.S. Supreme Court ruled in Miranda v. Arizona “That the police must advise people of their rights before a law enforcement officer questions those in police custody. Custody refers to the deprivation of a person’s freedom of action in a significant way. If the police fail to give a Miranda warning before questioning a person in custody, the evidence gathered from the interview cannot be used against the person in a trial. If the interrogation leads to the collection of additional evidence, the “fruit of the poisonous tree” Doctrine precludes the use of this evidence against the person in a trial.”10

The police questioned and arrested me without giving a Miranda warning. Will a court dismiss the case? “No. A prosecutor can still bring charges against suspects even if the police failed to give Miranda warnings before conducting police interrogations. While prosecutors cannot use evidence gathered during police interrogations at trial if the defendant was not Mirandized, the prosecutor can use other evidence to secure a conviction.”11

If I agree to police questioning, can I later decide not to answer questions? “Yes. Miranda warnings give a person the right to stop a police interrogation at any time even if they already waived the right to remain silent. A person can assert this right by refusing to answer any more questions, requesting to speak with an attorney, or by requesting to remain silent. Once a person asserts Miranda rights, the police must discontinue the interrogation.”12

When police are forced and pressurized to demonstrate quick results, especially in a high-profile case. It is common that police officials will use any means necessary to get confessions out of their suspects. However, this hinders the very nature of criminal justice system. Seen commonly in cases of countering terrorism, or any person that is a threat to the national interests. As such, due procedures should be set up and human rights should be protected at the same time.